THIS OUTSIZE PHOTO CONTINUES TO THE RIGHT!
DO VISIT JAMES WHO HOSTS WEEKEND REFLECTIONS HERE!
Posted by Margaret Gosden at 5:42 PM 5 comments:

Email ThisBlogThis!Share to TwitterShare to FacebookShare to Pinterest
Labels: 18th Street between 5th and 6th Ave

SKYWATCH FRIDAY - A MOTLEY CLOUD CONDITION ABOVE AND BELOW IN NYC - 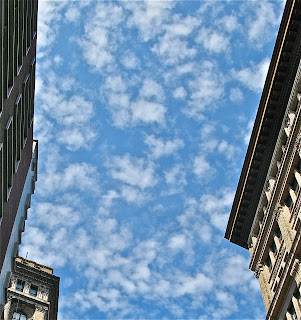 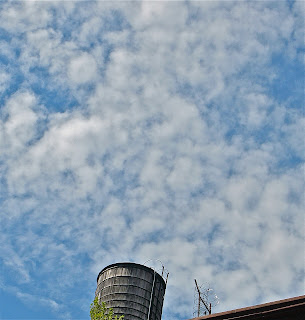 MACRO MONDAY - COMPANION TO 'IN RELIEF', THE PREVIOUS SSS POST... 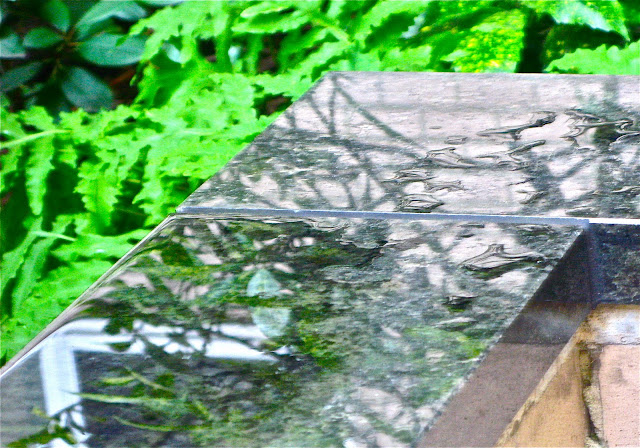 FRONT GARDENS TO APARTMENT BLOCKS ARE OFTEN CONTAINED BY LOW GRANITE WALLS - THIS PATHWAY LEADS TO MY DOCTOR'S OFFICE -  I ARRIVED JUST AFTER THE WATERING WAS COMPLETED...HENCE THE GREEN
SHADOW/REFLECTIONS AND PUDDLED WATER DROPS.
FOR MORE MACRO MONDAY PLEASE VISIT LISA'S CHAOS HERE!
Posted by Margaret Gosden at 5:47 AM 6 comments: 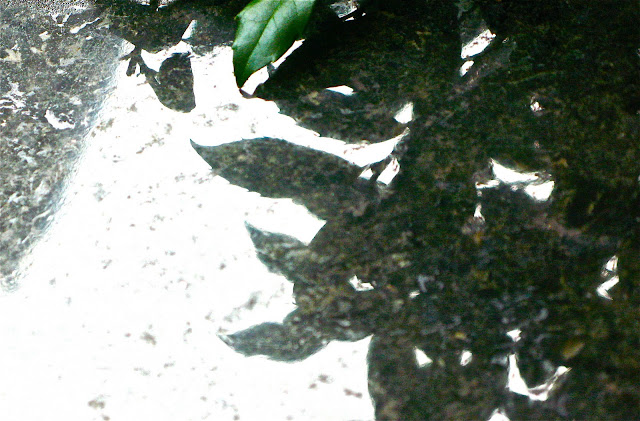 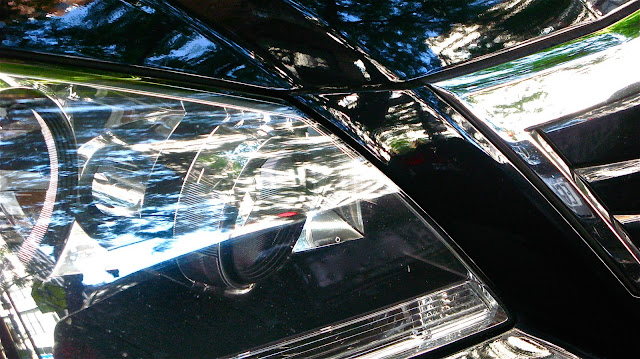 THAT WHICH WE HAVE SEEN DEVELOPING TO THIS DAY.   SHE SAW BEYOND TODAY WHAT IT MIGHT BECOME - MORE A COMPOSITION OF MOVEMENTS AND ABSTRACTIONS,  AND WHEN SOME NEW SYMBOL FOR EXPRESSING THOUGHT AND FEELING IS FOUND, THE FILMMAKER HAS ENORMOUS RICHES TO COMMAND.  WE HAVE ALREADY SEEN IT IN PAINTING.  AND IN PHOTOGRAPHY -

FOR RUBY TUESDAY, THESE DIGITAL 'PAINTINGS' ARE REFLECTIONS SEEN IN MOTOR CARS...RECENTLY - 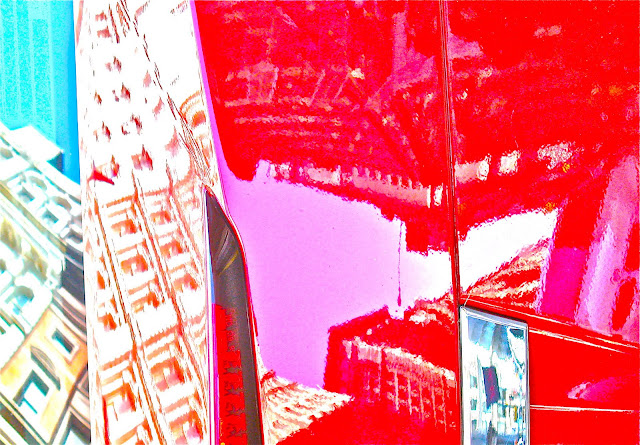 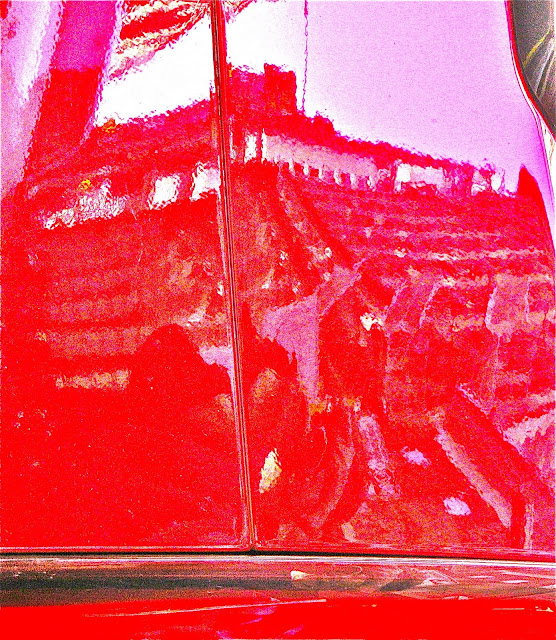 THESE SHOTS REMINDED ME OF WOOLF'S ESSAY, WHICH CAN BE READ IN FULL At WOOLF ON LINE HERE.

EXPERIMENTAL FILMMAKERS HAVE BEEN DISCOVERING THE POTENTIAL OF ABSTRACTION SINCE THE 1970s - ARTIST, BARBARA HAMMER, IS ONE FILMMAKER WHO IS AT THIS TIME BEING RECOGNIZED BY MoMA'S FILM DEPARTMENT - From September 15-October 13 -  A RETROSPECTIVE  - IN WHICH HER NEWEST FILM SHOWN,
'GENERATIONS',  SEEMS TO REFLECT SOMETHING OF WOOLF'S VISION FOR CINEMA.
'GENERATIONS' was made in collaboration with Gina Carducci.  Both used the Bolex camera to capture the final days of Coney Island's Astroland Amusement park. 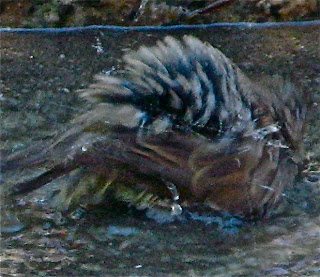 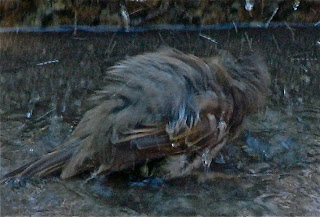 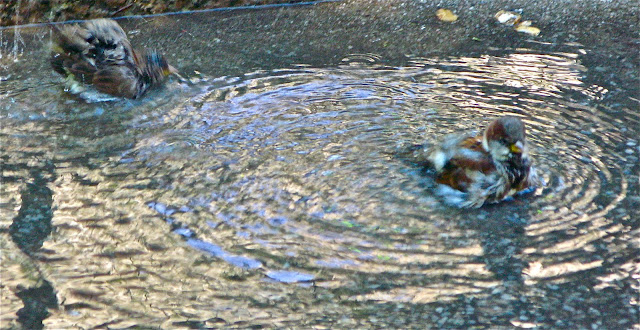 Union Square Park,  Sunday,  many walkers about, but these sparrows managed a quick dip for me!
For more MACRO MONDAY do visit Lisaschaos Meme here!
Posted by Margaret Gosden at 6:32 PM 9 comments:

PHOTOGRAPH ONE OF THE MOST PHOTOGRAPHED BUILDINGS.... 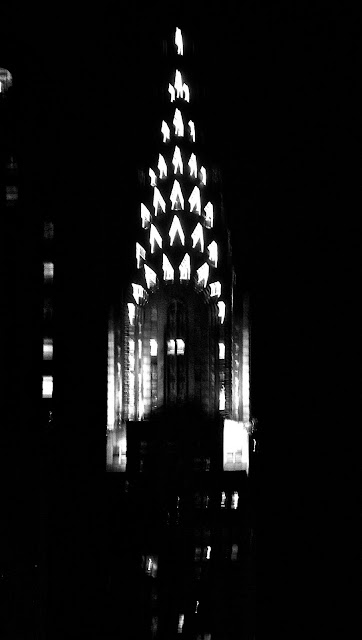 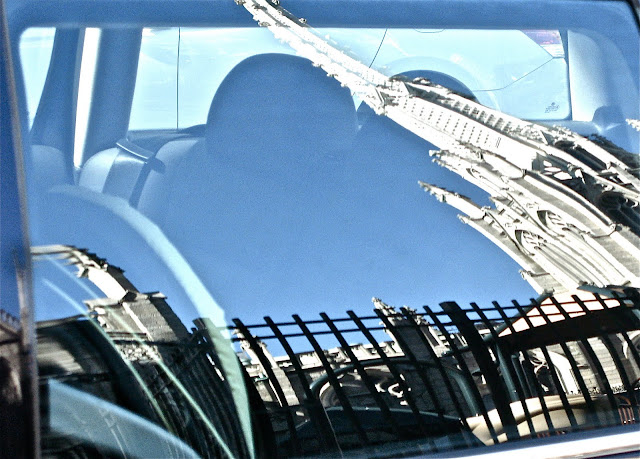 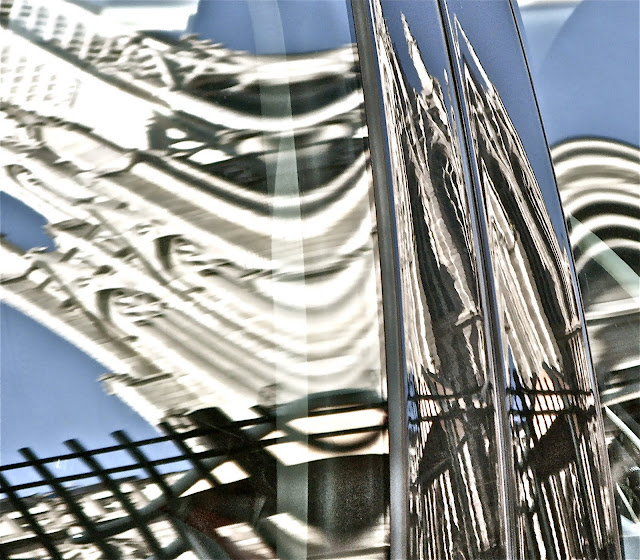 The Grace Episcopal Church on the corner of 10th street and Broadway
For more WEEKEND REFLECTIONS do visit here!
Posted by Margaret Gosden at 5:54 PM 11 comments:

Email ThisBlogThis!Share to TwitterShare to FacebookShare to Pinterest
Labels: Weekend Reflections in a motor car

THIS IS A COMMON FLOWER AND I ONCE KNEW THE NAME OF IT..... 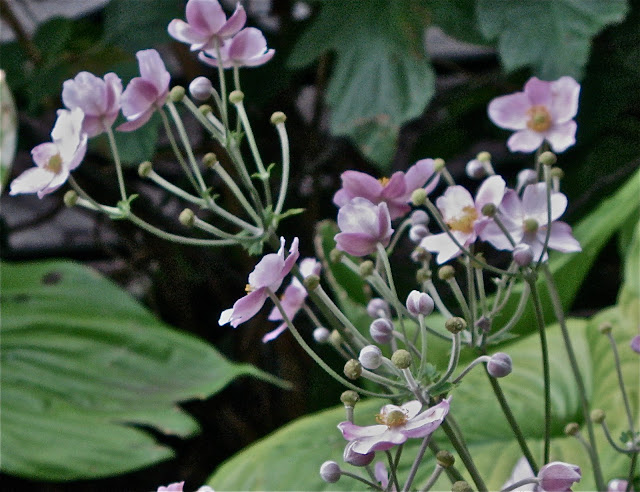 RECENTLY SEEN IN UNION SQUARE PARK -  it flowers after the white tobacco flower Nicotiana.    This one seems to like the same shady, sunlit, environment.    Does anyone know the name of it?
(Three books recommended:  1) Wild Flowers of America (1978) by Wasott & Platt, edited by H.W.Rickett - thanks to Lori at JARVIS HOUSE
2)  The Besler Florilegium by Gerard G. Aymonin)
3) Illinois Wildflowers by Don Kurz - thanks to BJ Roan
For more MACRO MONDAY please visit LISASCHAOS here! 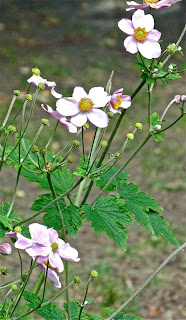 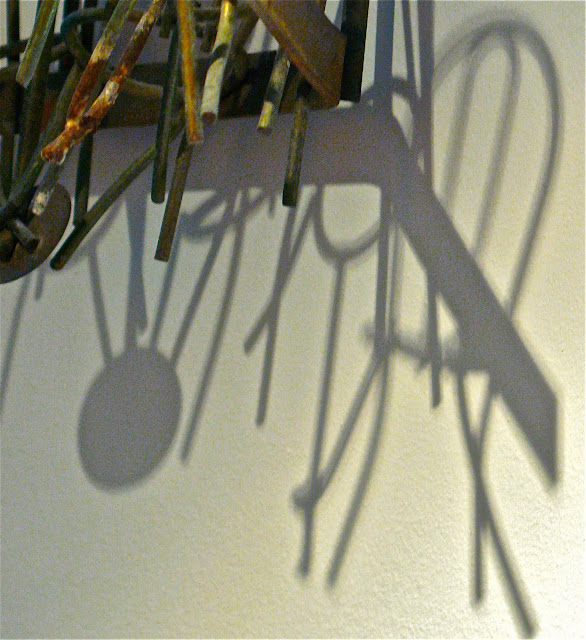 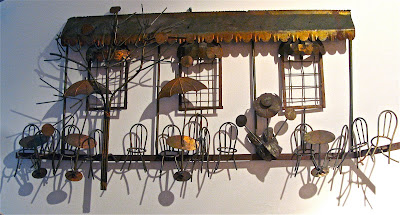 THE WEEKEND IN BLACK AND WHITE - OUT OF SIGHT... 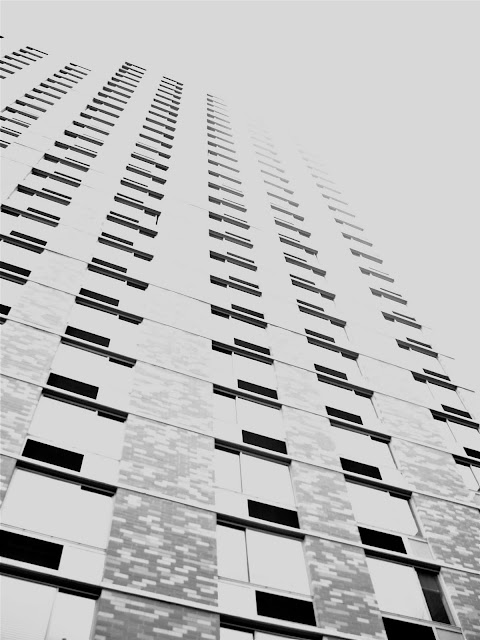 For more BLACK AND WHITE WEEKEND do visit here!
Posted by Margaret Gosden at 5:08 AM 4 comments:

SKYWATCH FRIDAY - LITERALLY, ON MY WAY TO THE SUPERMARKET! 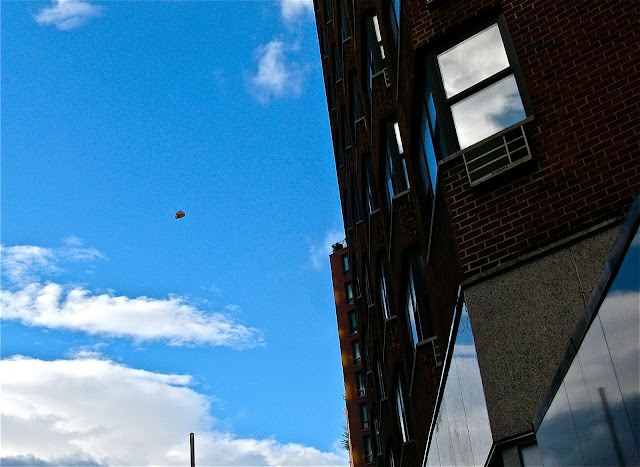 The ubiquitous plastic bag that ought to be banned... 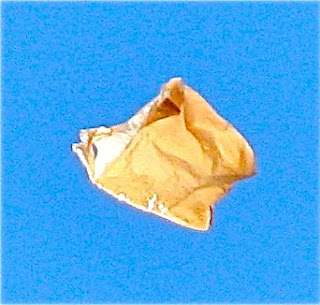 The joy of September's sunny, windy days -  following August's hot and humid offering for summer!
For more  SKYWATCH FRIDAY do visit Skyley here!
Posted by Margaret Gosden at 6:20 AM 4 comments:

"SPONTANEOUS CREATION IS THE REASON THERE IS SOMETHING RATHER THAN NOTHING, WHY WE EXIST.  IT IS NOT NECESSARY TO INVOKE GOD TO .... SET THE UNIVERSE GOING"
British physicist and mathematician Stephen Hawking says that "there need not be a God behind the creation of the universe".  One of several excerpts printed in the British newspaper, The Times, announcing the publication of his new book The Grand Design, September 9, attempting to answer "the Ultimate Question of Life, the Universe, and Everything". 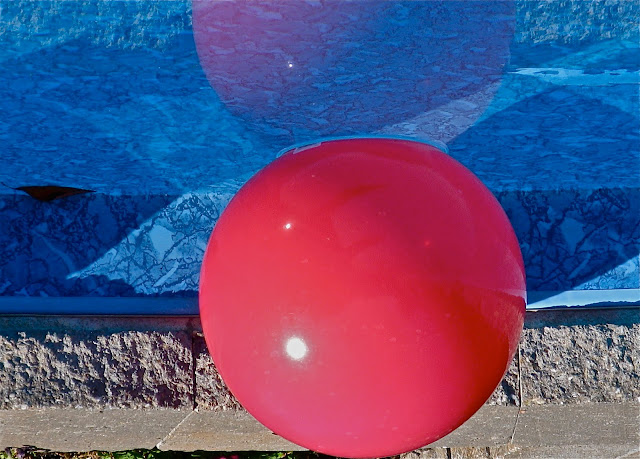 The red ball, a metaphor.  Turn it upside down and it suggests:
PLANETS/ MORNING STARS/ PARALEL UNIVERSES/ NO GOD/ JUST GRAVITY!
FOR MORE WORK OF THE POET VISIT MARY HERE!
Posted by Margaret Gosden at 3:00 AM 9 comments:

Email ThisBlogThis!Share to TwitterShare to FacebookShare to Pinterest
Labels: The Grand Design by Stephen Hawking and Leonard Mlodinow 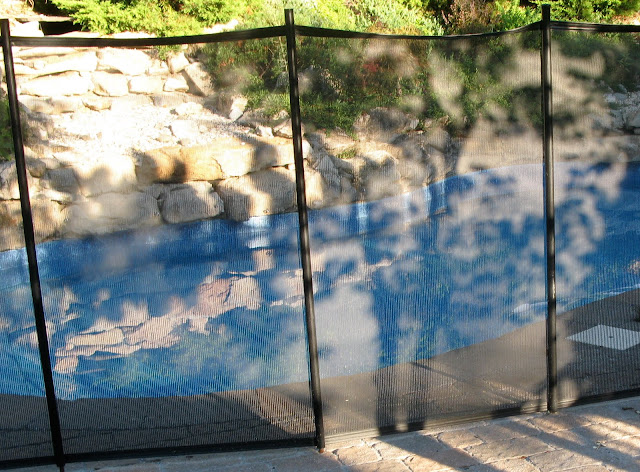 Email ThisBlogThis!Share to TwitterShare to FacebookShare to Pinterest
Labels: Pool reflections and shaddows

SHADOW SHOT SUNDAY - AN EARLY MORNING SHOT, THE BEGINNING OF ...

ONE OF THOSE RARE PERFECT DAYS ON LONG ISLAND - 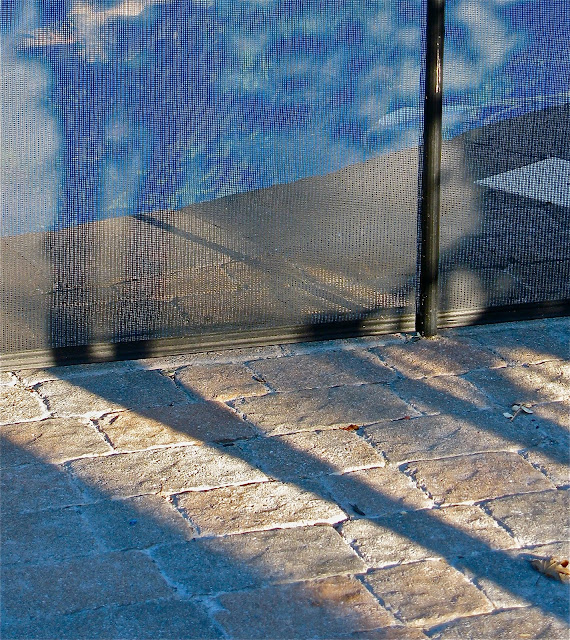 FOR MORE SHADOW SHOT SUNDAY, DO VISIT HEYHARRIET HERE!
Posted by Margaret Gosden at 8:55 AM 7 comments: