BLACK AND WHITE WEEKEND - ALL OF A TREMBLE... 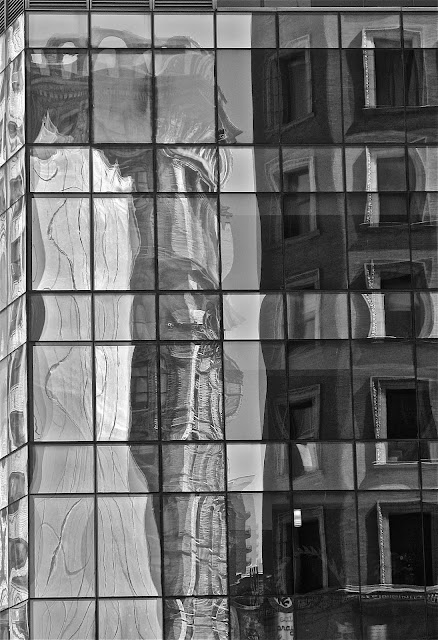 For more BLACK AND WHITE WEEKEND, the 'new home for the monochrome maniacs', do visit Dragonstar's presence here!
Posted by Margaret Gosden at 11:52 AM 8 comments:

Email ThisBlogThis!Share to TwitterShare to FacebookShare to Pinterest
Labels: Black and White Weekend - reflections in buildings 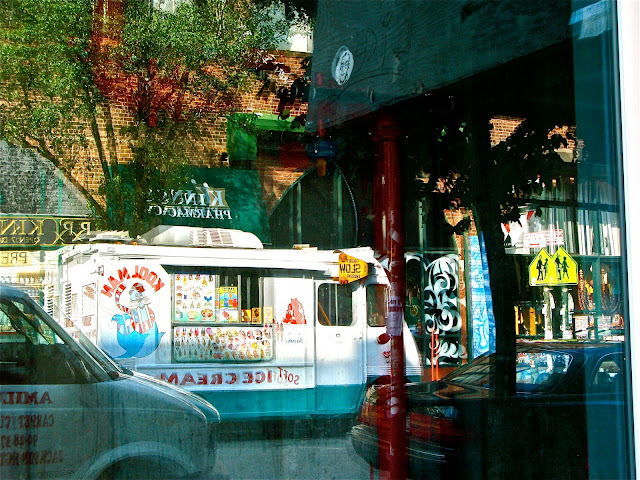 There is both motion and reflection here in busy Bedford Avenue, Brooklyn - reflecting the ambience  of the neighborhood.  Available walls are professionally hand painted advertisements and the graffiti here appears to be on the way out.  Restaurants open their windows and customers sit outside to enjoy their lunches  and dinners.

MOTION THURSDAY - BLOWIN' IN THE WIND...THINKING OF MARILYN

These dresses really were billiowing - so many women are wearing long sexy-looking dresses now - so cool for this heat wave.  This street vendor should do well! 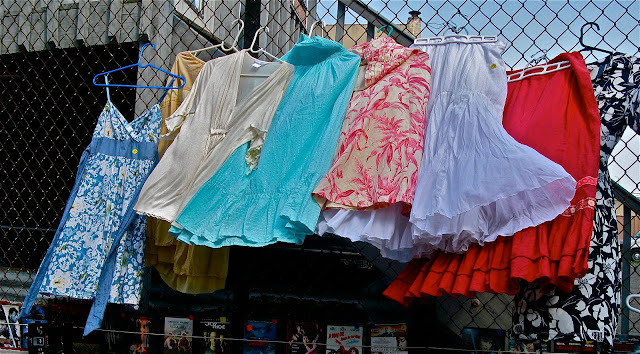 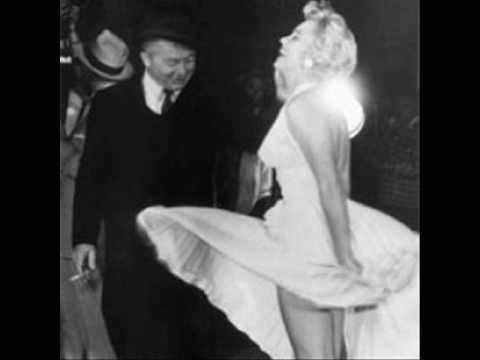 MACRO MONDAY - WHAT IS THIS? 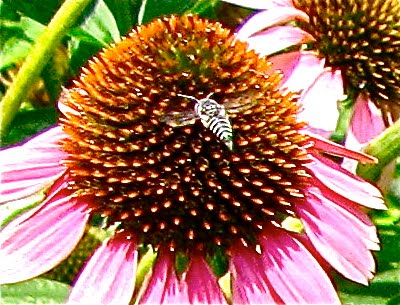 AN INSECT WITH STRIPES, BUT NOT YELLOW?

SHADOW SHOT SUNDAY - AT THE FOOT OF THE GRACE EPISCOPAL CHURCH SCHOOL STEPS .....

A drop of heaven on earth, perhaps.....for a while.
For more SHADOW SHOT SUNDAY please visit HeyHarriet here!
Posted by Margaret Gosden at 5:37 PM 8 comments:

BLACK AND WHITE WEEKEND - ACTUALLY, THEY ARE CARROTS 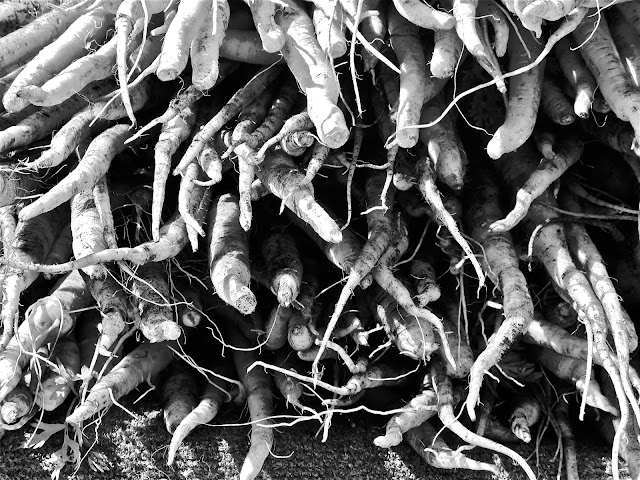 Yes, seen at the Farmer's market, I have found more appetizing displays of this crunchy veggie than this one!


For more BLACK AND WHITE WEEKEND do visit Dragonstar here!
(The new home for monocrome maniacs!)
Posted by Margaret Gosden at 4:48 AM 8 comments: 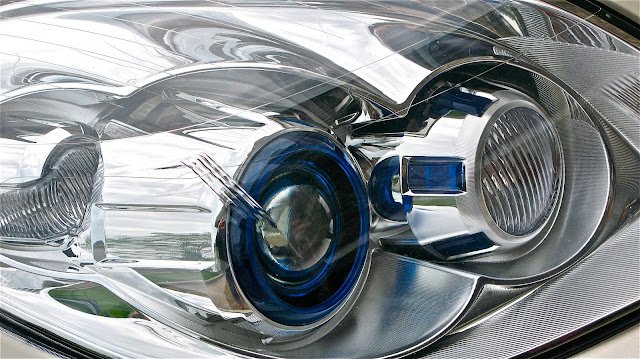 I can't recall what kind of a car to which these headlights belong!  I was just captivated by the shiny, sculptural shapes, and the reflections created by the design, from where I stood.   PS I believe I am reflected in the foremost headlight.  I just noticed that!

EARLY ONE MORNING THIS WEEK 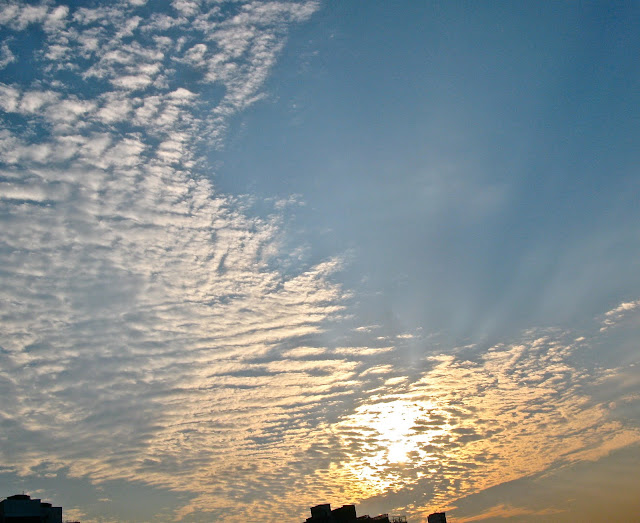 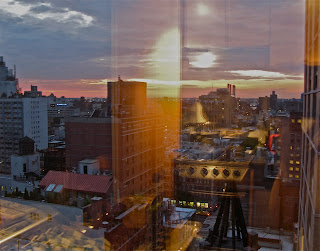 PS   5 am Friday sunrise - kitchen reflected in window!
Posted by Margaret Gosden at 2:43 AM 9 comments: 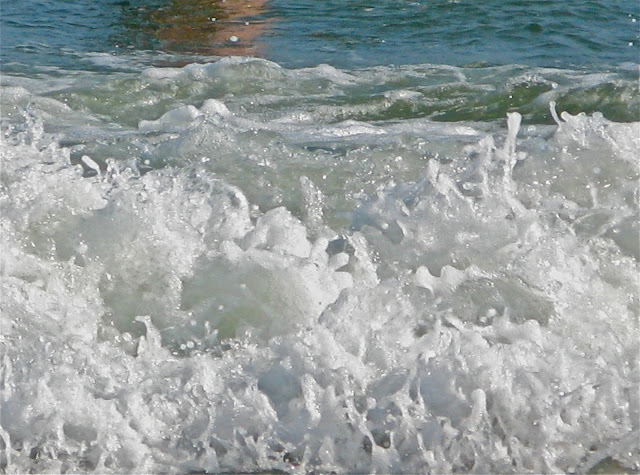 RUBY TUESDAY - WHERE HAVE ALL THE ARTISTS GONE? 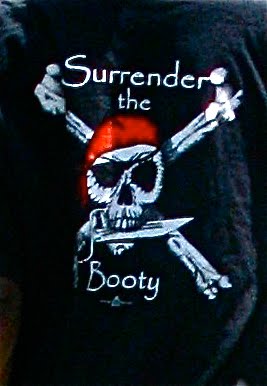 There's no other choice really.   Create cash flow again to bring back
jobs.   NYC's Mayor has just closed the door to those at one level who will not
be covered by The President's call today to extend unemployment

insurance benefits.  Why don't the politicians get it, whatever one did for a living?

THE SCENE BEFORE THE 19TH JULY, THE LAST DAY OF WORK 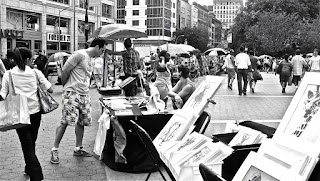 MACRO MONDAY - THE LAST OF THE DAY LILY..


GO TO http://wwwjarvishouse.blogspot.com/  (HUNTINGTON, LONG ISLAND) to find out about a sale of plants in different colours at Farmingdale College... 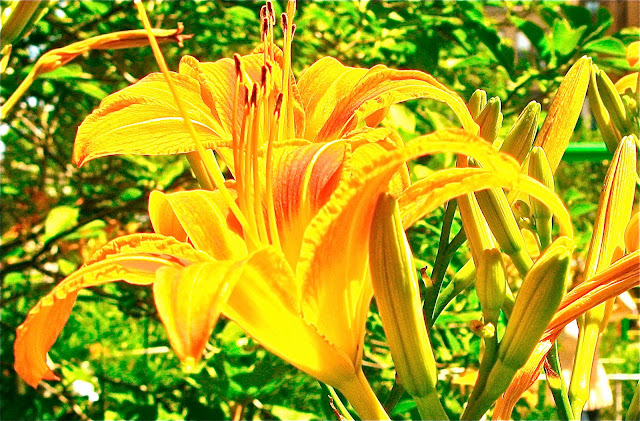 If you are a Day Lily fancier and would like to add variety to your garden, take a look at Lori's splendid series of day lilies photographed at Jarvis House in so many different colours.

Email ThisBlogThis!Share to TwitterShare to FacebookShare to Pinterest
Labels: The Last of the Day Lily 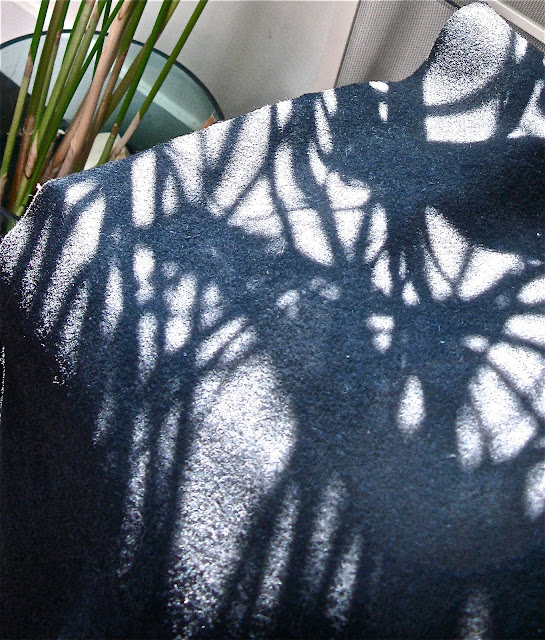 IT REALLY DOES WELL IN A SUNNY SPOT!


PS   See former post:  an update on the ruling to bar artists from showing their work

Where will Donna Lee Michas go now if she is not one of the lucky ones?
Posted by Margaret Gosden at 4:15 AM 5 comments:

WEEKEND REFLECTIONS - THE POLITICS OF OBSCURITY...

My image of an image behind glass is obscured by 'reflections' that interfere with the real viewing of the artwork - 'reflections' that are a microcosm of a growing larger problem - and that is the politics of curtailing certain inalienable Constitutional rights to folks who live here by politicians whose agendas are different from those of the people.        If you don't want to read the rant that follows,  just view my WEEKEND REFLECTION and move on! 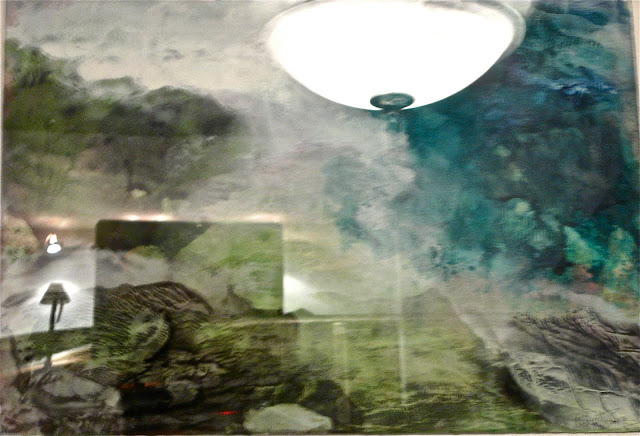 For more WEEKEND REFLECTIONS do visit Jamie here!
On July 19, 2010, many NYC artists who have the right to sell their work under the First Amendment Right to Free Speech in public parks, will be barred from doing so.  It may seem like just a local issue to many, both here and abroad, yet it is but a symptom of a world wide issue stemming from recent mishandled economic problems that continue to plague some nations as wrong-headed party politics and corporate interests deliberately set out to obscure common sense action for the sake of the party that is not in power and wants to be.
Art and artists are usually the first victims of government tightening, whether they be teachers of art or the artists themselves.  As I see it right now, the US banking system seems to be at the root of slowing cash flow, busy protecting themselves from further wrong lending,  instead of selectively speeding up the need to lend money at this time.  The government needs the banks to lend because no lending leads to no spending and no spending leads to unemployment.
Spending is what is needed now to move the economy away from a continuing recession and loss of jobs.  But the city of New York doesn't see it that way - the tax paying artist is to be removed to make more room for larger vendors who can pay higher fees and who, therefore, will charge more for their wares.  Tourists will not be getting the bargains they look for offered by artists willing to sit out there, come rain or shine, who are not charging extra for the overheads of an  elaborate cover for themselves.  They ingeniously make do with the very small spaces allotted to them.
When a population hears the politicians arguing about how to manage a weak economy, the natural response is to draw in one's horns - to switch off the lights, don't spend money except as needed, and for employers to fire anyone whose job is considered redundant. It is a psychology of fear that bodes ill,  the beginning of the end.  Particularly an end for many artists who do not expect the lawsuit to re-instate their rights against the city reaching the Supreme Court within the next 4 years.

As in many cities and countries, there is world of independent artists who depend on their otherwise unrecognized skills to make a living in this way.  It is an accepted tourist attraction, and exposure here is a step towards being discovered by a buyer, collector or a gallery owner.   Artist, Donna Lee Michas, commented - "The cumulative sadness in the park was sickening tonight",  as she and other artists anticipate joining the ranks of the unemployed.


In the end, it is not really just an issue for artists.  Everyone is affected by the mishandling of the economy, and the politics of greed needs to be recognized and stopped. 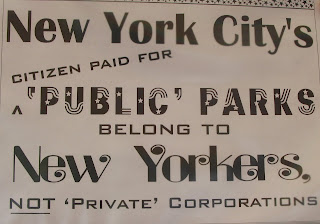 Posted by Margaret Gosden at 6:13 AM 9 comments:

ONE NYC MID-AFTERNOON BETWEEN WELCOME SHOWERS - 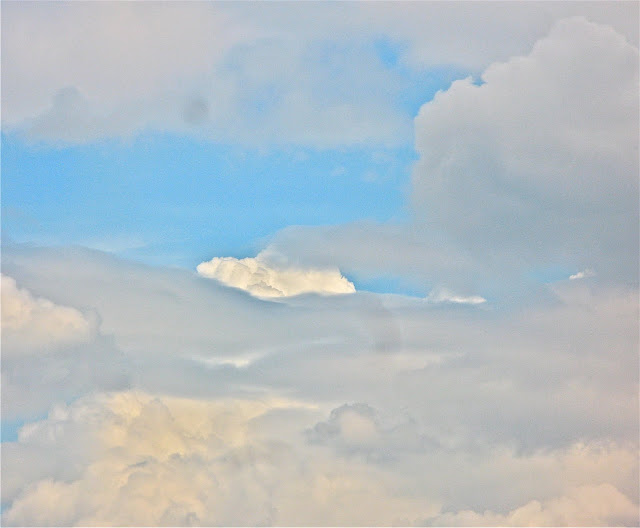 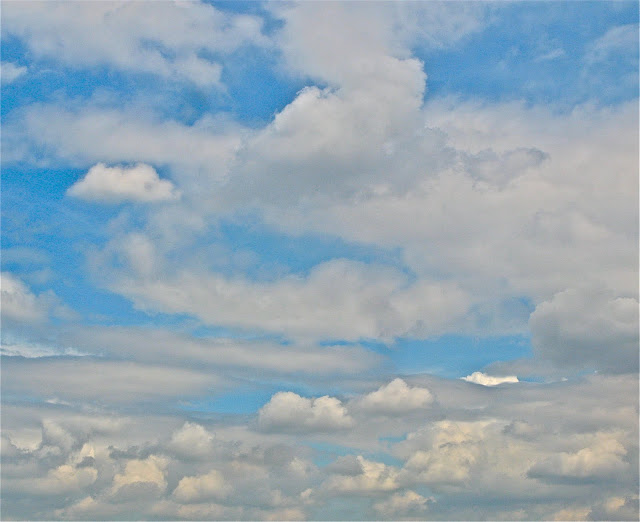 For more SKYWATCH FRIDAY do visit the Skyley meme here!
Posted by Margaret Gosden at 2:29 AM 5 comments:

Email ThisBlogThis!Share to TwitterShare to FacebookShare to Pinterest
Labels: Skywatch = One sunlit cloud

According to the AARP BULLETIN (July-August 2010) a national trend has seen a 43 percent increase in bicyclists between 2000 and 2008 as communities create 'Bicycle-Friendly' networks in tandem with park and highway improvement projects. 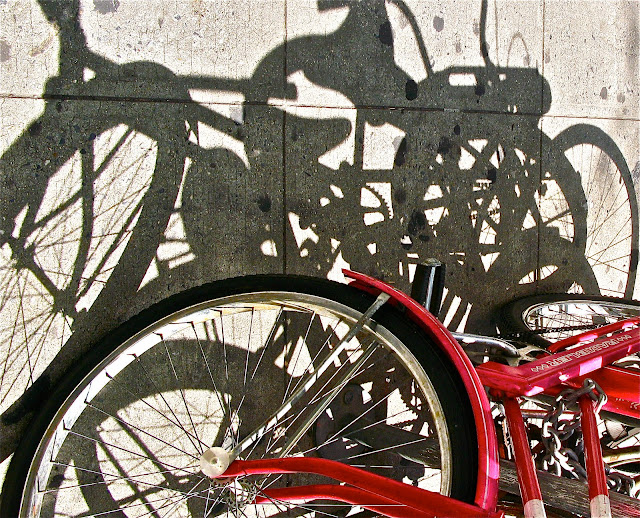 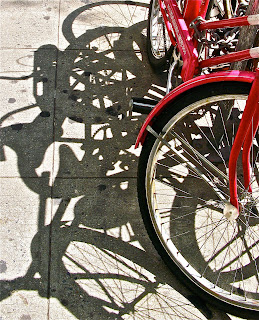 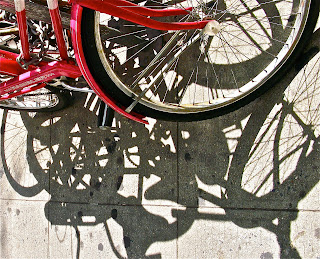 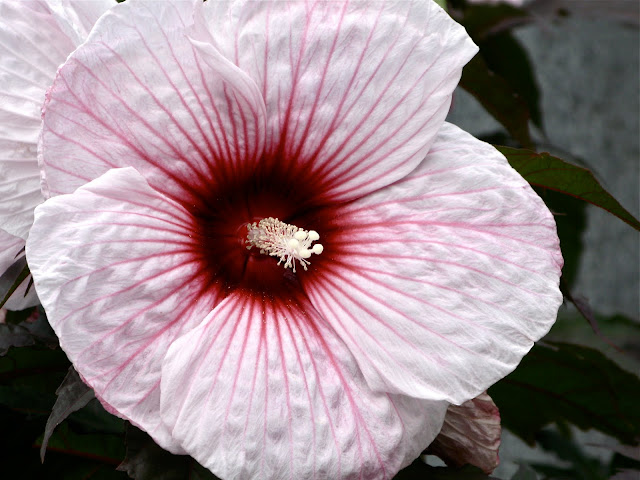 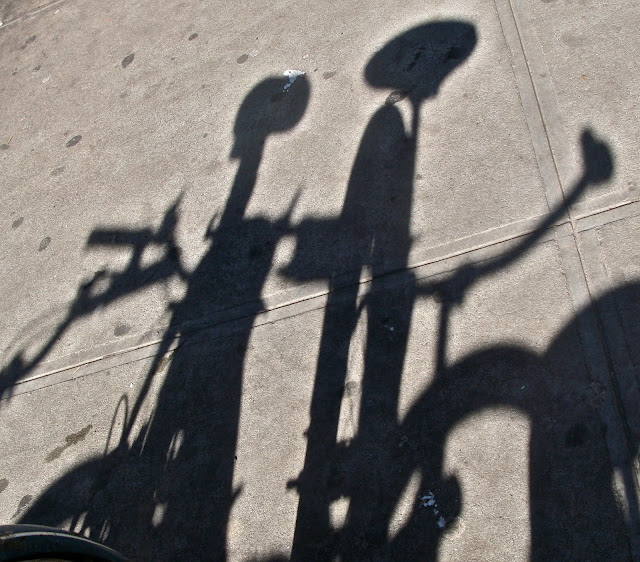 
PUZZLED GRANDCHILDREN POSING FOR THE CAMERA BEHIND ME! 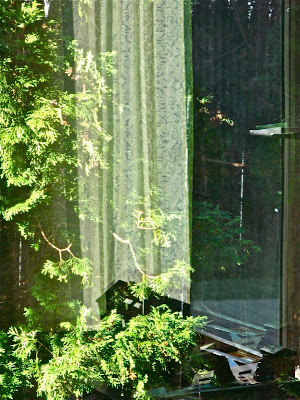 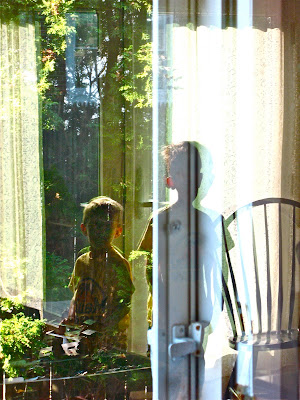 SKYWATCH FRIDAY - TEXTURE, CONTRAST AND A CLOSE UP...


A WHITE SUN THIS MORNING AT 7 am 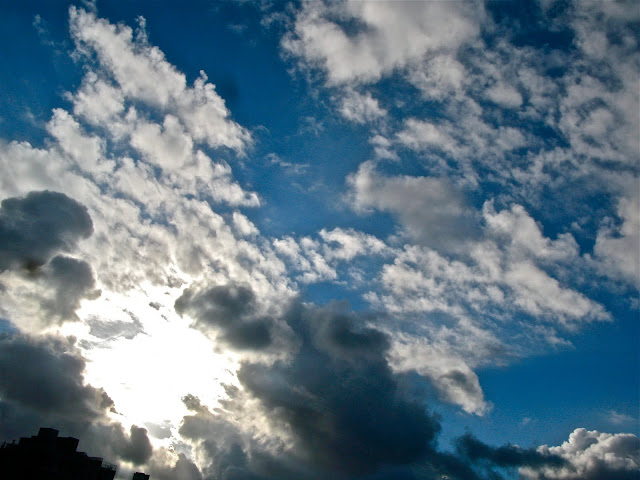 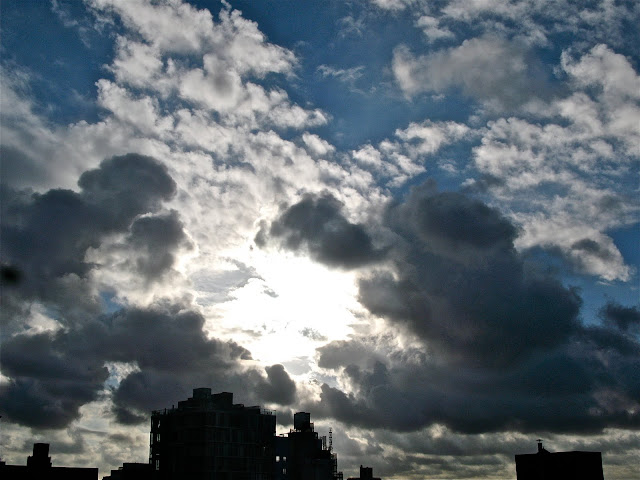 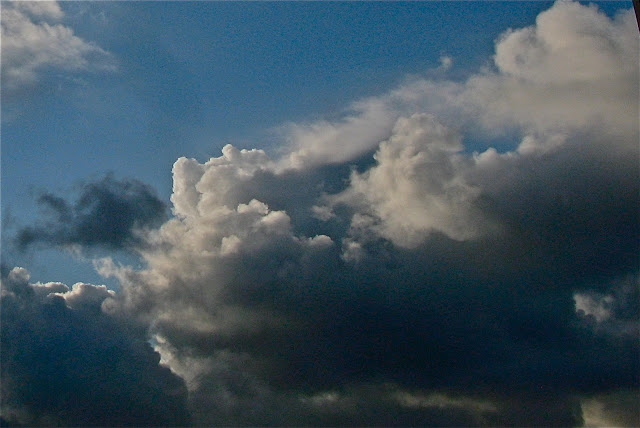 For more SKYWATCH do visit Skyley here!
Posted by Margaret Gosden at 4:51 AM 7 comments: 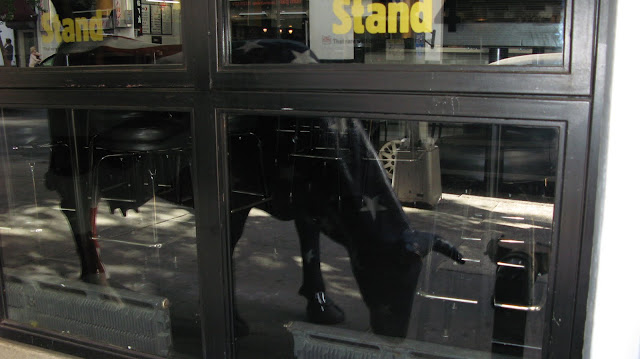 Not even a good last supper!


For more RUBY TUESDAY do visit WORK OF THE POET here! 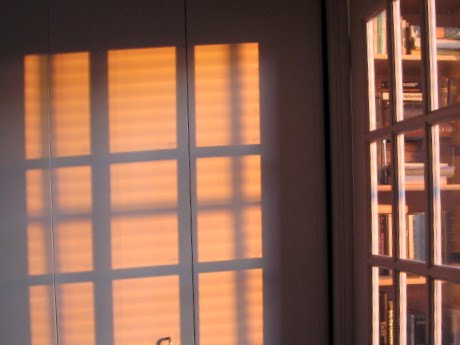 Posted by Margaret Gosden at 8:51 AM 6 comments: